The complexity of wrist movements is still not fully understood. The wrist is by far the most complex joint in the body and the most intricate and cleverly designed piece of engineering to create movements in all planes.

There are eight wrist bones, and they move in a very well-orchestrated synchronous way with the most cleverly designed anatomy of bones and ligaments. The three proximal bones (articulating with the radius and ulna) are the scaphoid, lunate and triquetrum. These bones form what is called an intercalated segment due to the fact that no tendons attach to it and that all its movements are driven by mechanical "signals" from the neighbouring bones.

This proximal row of wrist bones synchronises and facilitate the movements of the wrist, especially those of the dart thrower's motion with the wrist moving from the one side to the other side. This intercalated unit between the three bones is dependent on the integrity of the ligaments between these bones. The scapholunate ligament is the most common wrist ligament injury, and it is not hard to understand that the whole wrist will be in disarray if the scapholunate ligament is torn.

The ligament anatomy is even more complex. It is C-shaped, keeping the scaphoid and lunate very closely aligned. It allows some rotation and movements in other planes as it perfectly facilitates the smooth glide of the eight wrist bones with the radius-ulna unit. The ligament has three parts: the palmar part, the proximal and most importantly, the dorsal part at the back of the hand. This dorsal part is the most critical and all surgery is aimed at reconstructing this part of the ligament to restore normal wrist function. It must be understood that when this ligament is torn, the wrist bones assume an abnormal position and synchrony is lost. It is just a matter of time for hand osteoarthritis to follow, with the loss of cartilage, pain and a stiff wrist. 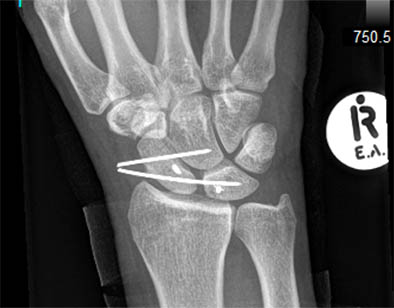 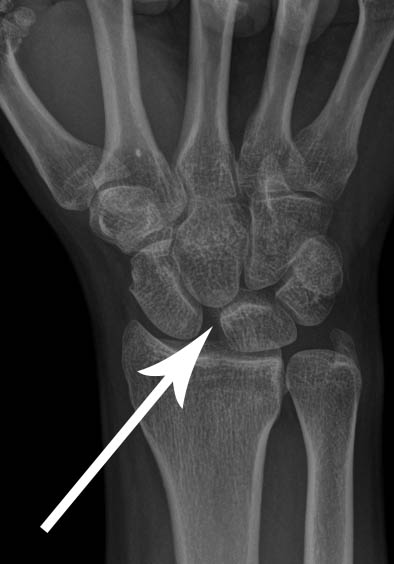 What are the related symptoms of scapholunate ligament injuries?

Once this ligament is torn, the disarray of the wrist bones is expressed as pain all over the wrist, with sudden sharp stabbing pains, clicks or clunks and weakness and swelling of the wrist. If this is left untreated, the wrist will become stiff due to scar tissue, and arthritis will develop in a predictable pattern called the SLAC wrist (Scapho-Lunate-Advanced-Collapse). The treatment for a SLAC wrist is based on surgical salvage procedures, with either excision of bones or fusing bones together. For this reason, it is important for scapholunate ligament injuries to be treated early in the acute phase of the injury.

How are scapholunate ligament injuries treated?

Rehabilitation is a long road, and the main aim is to regain a state of synchronous wrist movements with no pain, good strength and stability in the wrist. Studies have shown that excellent results are achieved in 80-90% of cases one year after the operation.

My normal rehabilitation sequence is as follows:

Full-time post-surgery cast worn for two weeks then will be removed and a custom-made thermoplastic splint is fitted. The wrist remains immobilised for 6-8 weeks. Wires are removed in theatre, under general anaesthetic, at 6-8 weeks post-surgery. The wrist joint is also manipulated under anaesthetic to help regain some wrist movement.

At 3-6 months post-surgery, the scapholunate ligament should be well healed, and the emphasis is now focused on more movement, strengthening of the hand and wrist and proprioceptive re-training. Proprioceptive training teaches the brain where the wrist is in space.

Between 6 and 12 months, normal activities can be slowly introduced, keeping in mind that the wrist has been immobilised for a long period and that it will be stiff, especially in winter months. At one-year post-surgery, the goal is to have a wrist that can move well, but is stable, and has been "saved" from the devastating effect of arthritis in the hands.

Prev
Next
REQUEST A BOOKING
BACK

Please complete the following detail for us to contact you to secure a booking.